Being a Good Friend to Someone Who’s Hurting

Many years ago, I got an unfortunate call that one of the students in our church youth group had died unexpectedly. The pastor asked if I would play for the funeral. The parents were friends of ours, and the usual questions quickly flooded my mind… what will I say to them? Do I need to bring a meal? Can I clean their house for out of town family coming? The perceived need to say or do just the right thing was overwhelming. My friends were hurting tremendously and I wanted to help ease their pain. But I had no idea what to do or say. 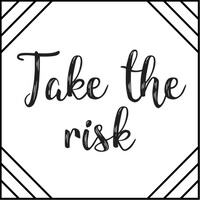 There’s something about awkward situations that steals our tongue and strikes fear in our hearts. We need the right word. Something encouraging. Comforting. Wise. Maybe a Bible verse we’ve committed to memory for such times. We’re afraid of making things awkward, being uncomfortable, not being able to fill the space. And we’ve gotta fill the space, right? Well, maybe not.

My friend, let me free you from this unnecessary burden. Our people don’t expect profound answers from us. Truth is, they don’t want our attempts at these kinds of answers. Hard is hard, and a perfectly-phrased, perfectly-timed thought or word isn’t going to fix it.

If you’re feeling stuck, unsure of what to say to a friend in a hard season, here are some thoughts to move past the awkward, while keeping things real:

Whether we’re the friend who’s suffering, or whether we’re trying to be a good friend to someone in a tough situation, responding with gentleness is key. People won’t know the right thing to say to us, but at least they’re trying. Our hurting friends don’t always need us to say anything, so we shouldn’t push our need to dialog over their need for silence. Recognizing that we’re all at least trying is a good pathway to gentle responses. Gentle friendship is very comforting.

Be okay with the gift of silence.

Often, our hurting friends don’t need us to say anything, they just want someone to sit beside them. This can be reassuring that they’re not alone on this journey. Something as simple as, “I’m here” is all that’s needed. Sometimes they really do want to be alone. Many people cry in solitude or process their anger over the situation when they're by themselves. Giving a little silence space is healthy as our friend processes her grief in her own way.

Let your friend guide the level of interaction.

Be responsive, but not necessarily leading here. I’m not real good at this one because I make the assumption that if my friend would just talk through their feelings, they’ll feel better. This isn’t always true. Some gentle prompting might be in order, but follow your friend’s lead in how much to dialog. She may honestly just not feel like talking in the moment.

Talk about the elephant.

Let’s be honest. Our friend is going through a difficult season, a rough diagnosis, a huge loss, etc. It’s not like we don’t know this is the case. So many times, I’ve dodged the real issue and played the let’s-pretend-this-didn’t-happen card. But when my friend is going through something hard and I don’t mention anything about their trial, it’s like an elephant sitting right on my feet. I have to peer around the elephant just to see my friend, but at no point do I mention the creature sitting right there on my foot, crushing my ankles and cutting off circulation to my toes. 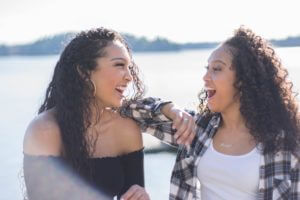 Searching for the right thing to say can be a bit awkward, but not saying anything at all is wounding. Not mentioning the elephant adds to the tension. It’s right in front of everyone. While we aren’t expected to have the perfect phrase, it’s nice to voice that we care. Because we do care. And when we don’t say anything to acknowledge our friend’s suffering, it can look as if we don’t care. Which isn’t true at all. You may just find a few surprise laughs, even just at the awkwardness of trying to dance through these words. I've been around cancer patients who got a good laugh out of my awkwardness of asking whether or not to help them with their hair after their shower. Duh. We had a good laugh, and it broke the ice. Gentleness on my friend's part went a long way to let me know it was okay that I totally messed that up.

So talk about the elephant. Follow your friend’s lead, she may or may not want to go there with you. But at least you acknowledged her pain. Phrases like these can work well: 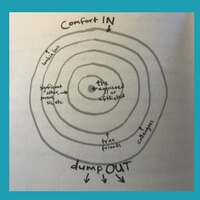 Comfort In, Dump Out.

In the book, Just Show Up, Jill Lynn Buteyn writes of her friend’s, Kara’s, journey with cancer. She quotes an article from the LA Times titled, “How Not to Say the Wrong Thing.” The suggestion is to draw a circle with a number of rings around it. The name of the person who is suffering does in the middle of the circle. From there, list others who are connected in various ways. The closer someone is to the one who is suffering, the closer their name goes to the center ring. And the key is this:  Comfort in, dump out.

For example, I wouldn’t complain to my friend Jennie’s family that she has been diagnosed with RA and it’s inflamed the space around her heart and how serious I fear this is. They are closer to the middle than I am. I don’t tell them I thought Jennie looked particularly sick one day or that the touch-and-go heart situation is taxing on me as her friend.

But Jennie’s husband, John, could say those things to me. He can dump out to me about how he’s struggling because I’m on a ring that’s further out than he is. In the same way, I can turn to one of my friends to lament that this is really hard, I’m afraid for my friend. If someone is closer in the circle than I am, my goal should be comfort phrases. When I need to express my own wounding and hurt, I should lean on those further out of the ring than myself.

This circle idea can be a general guide when being a friend to someone who’s in a hard place. It’s not a one-size-fits-all approach and there are likely friends with whom you can express your pain and fear about their situation directly to them. But often, needing the right phrase happens in a second and we’re caught off-guard. For these times, the circle idea works well and if we have to err, err on the side of comfort words and phrases.

Regardless of whether we find just the right phrases or not, it's honorable to be a good friend to someone who’s suffering. I’ve said many times, we never know what’s going on on the other side of someone’s smile. And it’s true. Just showing up, acknowledging your friend’s situation, and then being willing to give the gift of silence is comforting and so very kind. With auto-immune disorders, each day – even each hour of each day – can be very different, so include lots of grace for your AI friends to have a different response to your attempts. I’ve seen lots of patient scenarios over many years in healthcare, but nothing can be so confusing as those illnesses that change on a moment’s notice. It’s not just difficult for the patient, it’s hard and confusing for those around them, too. So grace. Lots and lots of grace.

God bless you for being a friend in the hard season.

Welcome to the group! Where do I send your updates and free resources ?